Looking for instructions on how to play the card game “War”?

The card game War is an extremely easy card game for two people to pick up quickly and start playing immediately.

Though mainly a game of luck, this game of cards can have a lot of fun moments that will keep you and your friends laughing throughout the game.

There may not be much skill involved – but it sure is a fun game of cards! Especially if cards are a hobby of yours :).

The Object of the Game

Similar to a game of Slapjack – You want to collect all of the cards!

Once one player has collected all the cards from the deck, they win the game of War.

Each player plays a card and collects the cards played for the round depending on the rules of the game.

How to Play a Game of War

You start playing War by dealing each player an equal amount of cards until the deck is completely given out.

You might be asking “But what happens when each player plays the same value card?”.

Rules When Players Have the Same Card Value

This is when the real fun begins when playing the card game War.

When both players play a card of the same value, this instigates a game of war.

The rules for how to resolve this part of the card game are as follows:

Winning a Game of War

A player will win the game of War by rounding up all of the cards within the deck, leaving the other player with none.

This game is great to play when you’re bored since it can take some time to finish. However, someone will be victorious at some point.

That’s what makes it so fun to play though!

Where To Play Ward Online

You can play the card game of War online if you so choose. I don’t know how exciting it will be, but you do, friend!

How To Play War – Final Instructions

There are several ways people have shaken up the rules for how to play War. These give an interesting twist to this classic card game.

Egyptian War is played similarly to the original game of War. Each player will play a card face up and sequences happen thereafter.

Each person plays a card. Nothing happens for any card played between 2-10.

Once a “Royal Card” is played by a player, the other player has a certain number of chances to play their own “Royal Card”.

If the player fails to flip a “Royal Card”, the first person to play the “Royal Card” wins the pile.

You can absolutely play War with more than 2 players if you so choose.

Deal equal amounts of cards to each player. Each person will then place 1 card face up.

As is the case with the normal game of War, the player with the highest card wins.

War breaks out at any time if two or more players have a matching card. EVERYONE plays war, not just the two players with the matching cards.

Once a war is won, that player collects all the cards played.

Repeat until one player holds all the cards!

This is a very popular version of the traditional card game of War. It involves playing more than one card at a time, and also includes the seldom-used Jokers! (treated at the highest card in the game)

How to Play Steal War

This game is played similar to the traditional game of War. Deal an equal amount of cards to both players and each player will play their cards in front of them at the same time.

You won’t be playing one card at a time. You’ll be playing 4 cards in total, round.

Pagat.com has a good tutorial on how to play steal war here.

Typically this game is offered while visiting a casino. This card game is about as simple as you can imagine.

A player places a bet and is dealt one card face up. The “house” deals a card to itself as well.

The higher card wins the round.

If the player matches cards with the house, they have two options on how to proceed.

Visit the Poggs Casino War Guide for more information on how to play and odds to win.

What You Need to Play War:

Is Ace the highest card in War?

Yes. Aces (or Jokers) are the highest cards in the game.

Do card suits matter in War?

No – suits do not matter, only the card number/value

Is War a long game?

As it’s a game of pure luck, it can last a long while. But that’s why it kills lots of time!

Can you play War with 3 people?

So are you ready to play a game of war – card style!?

This card game is a great way to waste some time on a slow and boring night with a friend.

So, bust out that pack of cards and get playing! 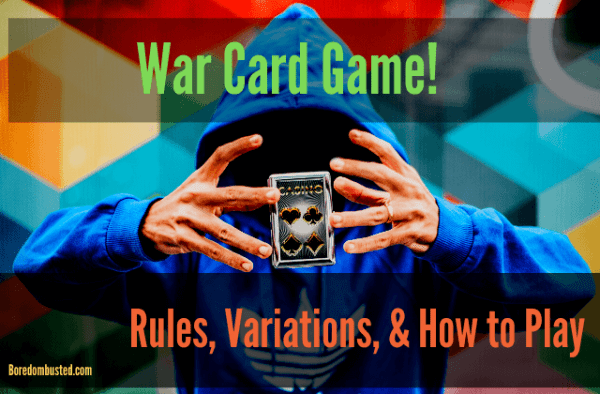 previousHow to Play Racquetball – A Beginners Guide
next350+ Websites to Visit When Bored! Cure Your Boredom Online